Well-administered and transparent elections affected by an uneven playing field, and marred by intimidation and lack of competition in the Kosovo Serb areas 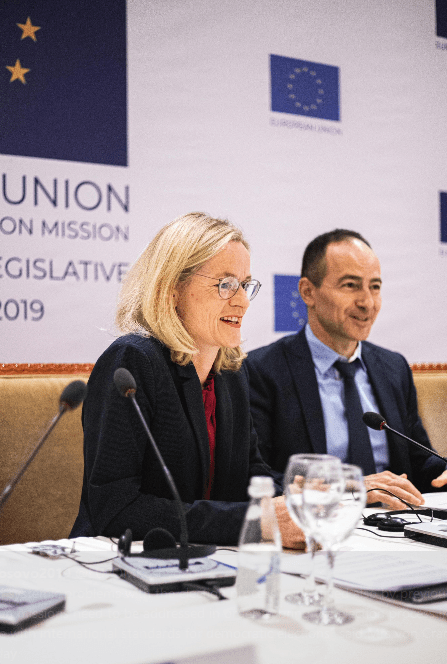 a Member of the European Parliament, presented today the preliminary findings of the European Union Election Observation Mission (EU EOM) on the 6 October early legislative elections in Kosovo.

“These early elections were well-administered and transparent. The campaign was vibrant and competitive allowing contestants to campaign freely in most of Kosovo.” said Mrs von Cramon at a press conference in Pristina today.

The election day was orderly, and the EU observers positively assessed voting and counting. The Central Election Commission (CEC) ensured the transparency of the process by promptly publishing online preliminary unofficial results for political entities broken down by polling station. Mrs von Cramon added that “Transparency was a key feature of the CEC’s work and it is commendable that despite the short time frame, the CEC has completed all electoral preparations on time.”

The campaign environment in the Kosovo Serb areas was marred by intimidation, which targeted non-Srpska Lista candidates and supporters. Furthermore, misuse of public resources and a lack of transparency concerning campaign finance resulted in an uneven playing field throughout Kosovo.

“Recurring systemic problems with the election process identified also by previous observation missions such as provisions for calling early elections in a short timeframe, an unregulated precampaign period and others, need to be addressed in order to bring the election process in Kosovo fully in line with international standards for democratic elections. Said Mrs von Cramon, who also added that: “A set of recommendations presented together with the mission’s Final Report will become truly meaningful only when given serious consideration in the next Assembly, and this should be done as soon as possible.”

Andrey Kovatchev, Head of the delegation from the European Parliament said: “We very much welcome the overall effective management of the process. However, the issue of campaign finance is an area of ongoing concern that has been raised by previous observation missions. The regulatory framework does not ensure transparency and integrity and it must be strengthened in order to fight corruption and guarantee a healthy democracy.”

On election day, the EU EOM deployed 108 observers from 27 EU Member States as well as Norway and Switzerland across Kosovo. The EU EOM will remain in Kosovo to follow the process at the Count and Results Centre and the resolution of any complaints and appeals, until the certification of final results.

The EU EOM and EU Office/EUSR in Kosovo operate independently under their specific mandates.